The Pope's Armada: 25 years on

Catholic Church,' declared a Time magazine article on cults. 'A terrifying portrait of several ultra-traditionalist movements in the Catholic Church,’ said the Association for the Rights of Catholics in the Church. In the New Statesman, academic and prominent writer on religion, Karen Armstrong called it, ‘a remarkably balanced and informative account...his book is disturbing.’   Sandro Magister, leading Vaticanologist and religious affairs correspondent for the Italian weekly news magazine L’Espresso, commented that, ‘The Focolare Movement has succeeded in establishing an immaculate, glowing image of itself as an everlasting rainbow.  Until today.  Because today, even for them, the enchantment is about to shatter.  A book by one of their former leaders, the Englishman Gordon Urquhart, published in Italy by Ponte alle Grazie paints for the first time a much less glittering portrait of the Movement which he claims to be much more accurate.’

These were some of the initial reactions reactions to The Pope's Armada when it was first published 25 years ago. Commissioned by Bantam Press in the UK, later appearing in translation in Germany (Droemer, 1996) , Italy (Ponte alle Grazie, 1997), Belgium and the Netherlands (Standaard, 1997), France (revised edition, Golias, 2001), Brazil (revised edition, Record, 2002) as well as a revised English language version in the USA (Prometheus Books, 2000), it remains the only internationally researched investigative and reportage into, and analysis of, the phenomenon of vast and powerful 'new movements' in the Catholic Church. Most importantly, because of the secrecy which is a major feature of these movements and thus the unreliability of their self-published material, more than 90% of it is based on primary material. And it is still unique in this respect.

It focused on the three largest of these organisations, and the ones which received unqualified support from Pope - now Saint - John Paul II: the Focolare Movement, Communion and Liberation and the Neocatecumenal Way. Given the highly secretive nature of these movements, and the lack of any previous critical appraisal, the approach of the book was that of qualitative research, using primary sources such as numerous interviews in several countries, attending events held by the groups themselves in Europe and the USA, gaining access to unpublished manuscripts and secret documents never before released to the public and in some cases not even to the authorities of the Catholic Church. My own 9-year membership of the Focolare Movement (1967-76) provided a lens through which I was able to analyse and explore how these secret organisations operate: what to look for and how to look for it.

Searching out and recording common characteristics of these groups, what emerged very clearly was their similarity to cults: the use of such practices as the personality cult of the leader; a rigid but secret hierarchy; a highly efficient internal communications system; secret teachings revealed in stages; vast recruitment operations using techniques such as love- bombing; arranged marriages; operating through front organisations, often with an apparently secular identity; indoctrination of members; boundless ambition for power and influence in the church but also in politics and the media; strong pressure to exact money from members and others to swell the movement's enormous wealth; in some cases a promotion of 'ego destruction' causing depression and mental breakdown on an alarming scale.

To accuse Catholic organisations, especially those vigorously championed by the Pope, as resembling cults was strong stuff in 1995 and met with some incredulity at first. Amidst the international controversy in Catholic circles, the Archbishop of Vienna, Cardinal Christoph Schoenborn, a member of John Paul II's inner circle, decreed that it was meaningless to use the term 'cults' to descibe official Cathoilc organisations. When asked for an interview for a newspaper article, a Cardinal of the Vatican's Pontifical Council for the Laity told me that I was wrong to have written a book on the subject: such matters must be dealt with behind closed doors - an argument with a chilling ring in the wake of Catholicisim's world-wide pedophilia scandals. Interestingly, however, not a single fact presented in the book was ever challenged by the movements or other defenders. What the criticisms of The Pope's Armada - and they were ferocious - had in common, were that they were largely of the ad hominem variety, personal attacks on my character as a witness - that the book was written as revenge against Focolare, for example.

In 1995, The Pope's Armada presented a thesis which was so little-known and unexplored that, even to experts on Catholic affairs, it seemed too bizarre to be believed. A well-known English Catholic novelist actually compared it in his review to fake biographies written by anti-Catholics and militant Protestants in the nineteenth century purporting to describe the lurid horrors going on in Catholic convents and monasteries. In the past twenty-five years, however, there have been enormous changes. The movements have become larger and more powerful than ever, but The Pope's Armada's challenging assertions have become widely diffused and accepted by academics, human rights bodies and anti-cult organisations. Social media has provided opportunites for ex-members - and even current members - to share their first-hand experiences. Networks of former members of Catholic movements, clerics and academics have developed, particularly in Europe. Although the book was aimed at the general reader, in 1995 it was something of a niche subject. Mainly thanks to Dan Brown's The Da Vinci Code (2003), the topic of mysterious Catholic movements has now become mainstream - in fact The Pope's Armada was included in the 'partial bibliography' used in researching that novel.

Most interesting of all - and an important incentive behind this blog - are recent changes in how the Vatican sees the movements. Clearly, the Pope of the book's title is John Paul II, though it could equally refer to Pope Benedict XVI, the former Cardinal Ratzinger, John Paul's most faithful henchman who deemed the new movements 'the one good thing to emerge in the Church since the Second Vatican Council.' Pope Francis, on the other hand, judging by recent actions, documents and pointed addresses to members of these movements, has a clear idea of some of their dangers, as will be thoroughly demonstrated in forthcoming posts.

Have my views changed? Rather they have been confirmed by the many examples I have since had access to - mainly from numerous readers who have contacted me over the years. The only change, perhaps, is that in the case of Focolare, I find it a great deal weirder than I did when I wrote The Pope's Armada in 1995.

In The Pope's Armada 25, my aim is to examine these changes through posts, podcasts and interviews. Please contact me if you feel you have something of interest to share on these issues. 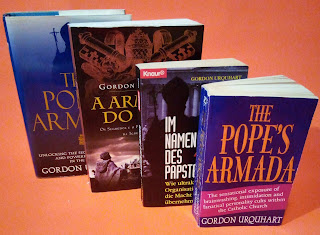 Out of the past: 25-year archive

Gordon Urquhart
Gordon Urquhart is a traditionally published author, film maker and journalist. In addition to The Pope's Armada in its English language and French, German, Italian, Flemish and Brasilian editions, he has written two LGBTQ historical novels published under a pseudonym. His journalistic work, covering such subjects as religion, cults and LGBTQ issues, has been published in The Times, The Guardian, The Tablet and many other publications. His award-winning film projects include fifty arts and entertainment programmes for British Airways. In the early 90's he founded one of the first LGBTQ video companies in the UK, producing drama and general interest programming that was distributed world-wide, including the first gay soap, first gay detective series and a dramatisation of the novel Teleny attributed to Oscar Wilde. In 2013, he qualified as a counsellor and hynotherapist specialising in the care of ex members of cults, particularly those in the Catholic Church. News of Urquhart's current writing work -mainly fiction and drama - can be found on the site kalamos.org.